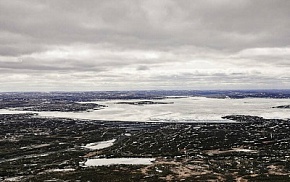 Arkhangelsk, Murmansk, Norilsk, Anadyr, Vorkuta, Dudinka and 125 more towns in the Arctic zone of the Russian Federation may be entitled to state support measures.as supporting settlements of the Russian Arctic. This was reported on Tuesday by Maxim Dankin, Deputy Director for Regional Development of information and analytical center of the State Commission on Development of the Arctic.

The Information and Analytical Center of the State Commission and the Institute of Regional Institute of Regional Consulting has conducted a study and identified 131 supporting settlements in the Russian Arctic Russian Arctic zone, so that targeted measures of state support could subsequently be developed for these territories. Four rotational shuft villages ( Sabetta, Varandey, Bovanenkovo and Yamburg) have been also included.

Among of such settlements included four rotational villages - Sabetta, Varandey, Bovanenkovo and Yamburg.

"The absolute leaders in terms of the number of functions performed are: Arkhangelsk, Murmansk, Nadym, Naryan-Mar, Norilsk, Noyabrsk, Noviy Urengoy and Tarko-Sale. Many different functions are also performed by Anadyr, Vorkuta, Dudinka, Labytnangi, and Turukhansk. Accordingly, these settlements can claim for the widest range of support measures", - said the interlocutor of the agency.

Totally authors of research have analyzed 256 settlements with population over 500 people by 57 criteria. Among the requirements were: location of medical and educational organizations, location of logistical infrastructure, proximity to fields, for which licenses have been issued, and other indicators. As a result, it has been possible to choose these settlements and group them according to their specialization.