Creation of a power supply center Capital of the Arctic territory is estimated at 4.7 billion rubles 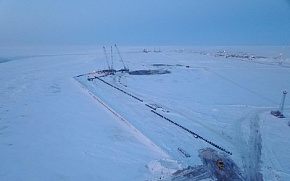 According to the preliminary estimates the construction cost of power supply center for Capital of the Arctic territory of advanced economical development in Murmansk region will amount to about 4,7 billion roubles. This was announced by the head of the region Andrei Chibis on Thursday.

"This is a unique project, the first big energy concession to provide all our projects with electricity. We have a partner, Rosseti electric grid organization, as well we work together with the Ministry for Development of the Far East and the Arctic, which will compensate for this concession and infrastructure in stages. This is a chance to get energy infrastructure in the shortest possible time and implement all the planned projects. Now we are talking about 4.7 billion rubles for the entire energy infrastructure," - said Mr Chibis, summarizing the meeting on the issue of infrastructure support for Capital of the Arctic.

The governor has also added that today, the total capacity required for the implementation of the projects is 214 MW, but the final project of the power center is planned to be created with a capacity reserve in order to immediately provide power to future investment projects.

Deputy Minister for the Development of the Far East and Arctic Anatoly Bobrakov, who also participated in the meeting, has noted that the roadmap for the implementation of the energy concession project in the Arctic is expected to be approved by the end of October. "We have agreed that a roadmap will be signed during the Russian Energy Week. By the end of the year, we will work out a final decision and submit it to the Russian government for consideration," he said.

"Capital of the Arctic" - the first Arctic territory of advanced socio-economic development, was created in Murmansk city and the Kola district of the Murmansk region. The following preferences are provided for the residents of that zone: insurance premiums for newly created jobs (7.6% for 10 years), income tax is lowered (5% instead of 20% for the first five years and 12% for the next five years), as well as full exemption from property tax for the first 5 years and from land tax for 3 years.