The Ministry of Economic Development of the Russian Federation considered the Resolution of the V International Forum "Arctic: Today and the Future" 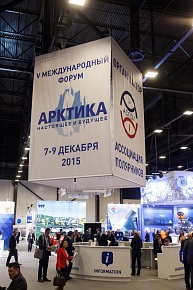